Celebrity chefs are celebrated for various reasons, and they are probably why the cooking show holds so much appearance to the average American. These guys and ladies sure know how to whip up a good meal, and they have carried that expertise into creating a long, fulfilling, and wealthy lifestyle. Cooking isn’t easy, and you have to take a survey to know how many people can cook the most basic is meals by a celebrity chef’s standards.

One of the finest chefs on the planet is a certain man named Mario Batali, a culinary genius who has seen it all. Mario Batali has amassed a considerable following thanks to his excellence and his longevity. That is a chef who has conquered the United States of America and has set out to push his brand beyond the country’s shores, making sure that “Mario Batali” is a global brand.

Here, we will be discussing his background in the culinary industry, where he was born, where he learned how to whip up a good dish, and how he gained so much popularity in his culinary career thus far. We will also discuss his most famous restaurant, a restaurant that needs no introduction for classy food enthusiasts.

Further along the line, we will discuss Mario Batali’s most popular cookbook and one of the best-selling cooking books of its time. There’s so much to say about the great Mario Batali, and now we’ll take you into his delicious world. So without further ado, let’s get into the head of one of the Culinary Industry’s finest sons.

Where is Chef Mario Batali From?

Mario Batali was born in Seattle, Washington, in 1960 to an American man of Italian descent and a mother of French-Canadian ancestry. He has been exposed to numerous cultures and cooking techniques thanks to the multiethnic nature of his household, and he didn’t have any issues bringing this influence to his latest endeavors. Mario has always had his eye on culinary greatness and worked as a cook while attending the Rutgers University in New Jersey.

A go-getter, and believer in realizing his wildest dreams, Mario Batali worked as a sous chef for Four Seasons Clift Hotel San Francisco. He gathered some much-needed experience before he took his talents to Four Seasons Biltmore as a sous chef. He did all of that before he turned thirty, as he vowed to make the most of his talents before the pressures of the culinary industry got the better of him.

In the late 1990s and early 2000s, Mario Batali’s star began to rise, as he appeared a couple of times on the famous Food Network show “Molto Mario,” making him one of the most recognizable chefs in the United States of America. Mario Batali has always believed in community, and he has earned a reputation for being a remarkable team player. He and a few friends came together to create the B&B Hospitality Group Babbo Ristorante e Enoteca in New York City.

This restaurant has earned the coveted Michelin Star award for culinary excellence. Mario Batali has also released numerous cookbooks detailing some of his most famous recipes. He has opened over ten restaurants, appeared in a handful of television shows, and is one of the most recognizable brands in the culinary industry.

Mario Batali is one of the most recognizable chefs in the culinary industry, but that couldn’t stop him from paying the ultimate price for a host of his crimes. He was accused of various crimes such as sexual assault and battery, and as such, he lost a controlling stake in all his significant restaurant endeavors. Batali might be gone, but his personality still deeply reflects in all the restaurants built from scratch.

Hence we’ll be taking a look at his favorite baby. Of course, we’re talking about the restaurant that he affectionately named “Babbo.” Babbo has seen better times, but since its grand patron got ousted, it has only been on an upward trajectory.

Eating at Babbo is quite the experience, as this culinary hotspot is filled with exquisite meals, top-notch service, and a versatile catalog of music. The food is powerfully flavored, fatty, high-acid small plates, plates of pasta, and mains, exactly how Mario Batali would have prepared it.

What’s more, the barbecued squab with beet farrotto, which debuted over 20 years ago, still ranks among the best pigeons of New York, bursting with a clean, gently gamy juiciness. Batali might be gone, but the ethos of hard work remains, and that’s why Babbo is one of the most beloved in the entire United States of America and beyond.

There are many facets to the twisted genius that Mario Batali is. He is a comfortable man on the television, just as he was in a kitchen. However, not many people know that he is a successful writer and best-selling author. That is largely thanks to his book, Molto Italiano: 327 Simple Italian Recipes to Cook at Home, a compendium of some sorts. This book went through and dissected nothing less than through about two hundred and twenty recipes of simple, healthy, and seasonal Italian cooking for the American audience. 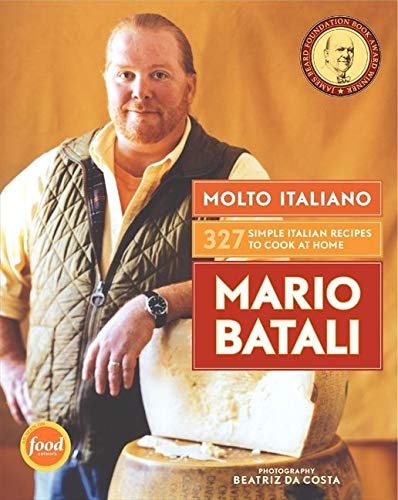 This cookbook is an asset for anyone striving to be the next Italian cuisine master chef, as it is easy to use and simple to grasp. You will also be able to see how Mario Batali created some of his most incredible dishes, how he crafted some of the finest recipes, and a couple of tips on how to do it all by yourself.

This cookbook features ten soups, thirty antipasti (many vegetarian or vegetable-based), forty pasta dishes representing many of the twenty–one regions of Italy, twenty fish and shellfish dishes, twenty chicken dishes, twenty pork or lamb, and twenty side dishes. You’re bound to get your money’s worth.

It is a shame that one of the best chefs in the world had to go down the way he did, but that is another example of “you must pay for your actions or inactions.” However, when the going was good, Chef Mario Batali happened to be one of the best chefs globally, and his name was a major top draw at culinary industry gatherings.

Times have changed, and other top chefs are coming through the ranks and doing great things. However, that doesn’t mean that we would forget the genius of Mario Batali in a hurry, a true master of Italian cuisine!