Celebrities are highly revered in today’s society, as they’ve earned so much acclaim for doing what they know best, and they’ve been doing such for quite a while. Chefs are amongst today’s biggest celebrities, as social media has given them a platform to show off their nous and experience at creating sumptuous meals for an adoring audience.

Celebrity chefs are having quite a ball these days, as they are getting the highest of praises for doing the things they love best, selling out cookbooks to fans that want to recreate their meals, and they are getting tons of followers on the gram. One of the most prominent celebrity chefs of the past decade is Marco Pierre White, a British chef that has the cooking ability to match his unorthodox personality. Chef Marco Pierre White is one of the top chefs in the world, he has been the driving force behind many culinary breakthroughs, and he is going to be discussed extensively today.

Here, we will be discussing Chef Marco’s background, where the top chef hails from, where he learned how to cook, why he got into it, and how he gained so much popularity over the years. We will also be checking out his most popular restaurant, some of the most famous dishes, and why the public can’t seem to get enough of his top-notch menu.

Finally, further along, the line, we’d look into the chef’s preferred knife set and why it’s his go-to slicing and chopping utensil. So without further ado, let’s pry into the minds of one of our generation’s most extensive cooking draws.

Marco Pierre White was born in 1961 into an inclined culinary family, as his father was a notable English chef during his hay day. His mother was an Italian emigrant from Veneto; thus, his parents wanted him to go to school and make a name for himself, leaving the culinary duties to his already well-established father.

However, white had other plans and proceeded to drop out of Allerton High School before he could bag any degree, and he ended up training at a chef in Hotel St George in Harrogate and later at the Box Tree in Ilkley. White was persistent with his culinary training, as he knew that they’d be no way that he’d be permitted to return to his home without him going back to high school.

So Marco kept hustling, moving around, and looking for better culinary career prospects. White has always been a go-getter, and he trained under some very Illustrious names such as Albert and Michel Roux, Pierre Koffman, and eventually Raymond Blanc. The latter employed him as the famous restaurant La Tante Claire, Whitest’s first major culinary gig.

Marco Pierre White has always been a man of his own, and after a while earning the necessary experience in La Tante Claire, he left to open up his establishment, dishing meals and training chefs in the process. He then opened a restaurant, Harveys in London, which earned him numerous accolades, visibility, and seemingly most importantly, the respect of his peers, as he won a Michelin Star a few months after he officially opened the restaurant.

What’s more, he even won the best newcomer award in 1987, The Catey Awards. Marco Pierre White is known as one of the more erratic and unorthodox culinary geniuses out there, as there are numerous tales about his shenanigans. He is reputed to have made the extraordinary Gordon Ramsay cry; he is known for throwing restaurant patrons out at the slightest infraction and losing his temper at anything he sees as remotely resembling disrespect.

White has trained some of today’s most prominent chefs, and his list is super long and extensive. He had taught or mentored chefs like Gordon Ramsay, Phil Howard, Stephen Terry, and Éric Chavot. So many of them have their unique tales to tell about Marco Pierre White, but none ever questioned his genius or ability. White eventually won his third Michelin Star for Harveys, a mere seven years after opening it, becoming the first British chef to be awarded three Michelin stars and the youngest chef for achieving three stars to that point.

White shocked the culinary industry by retiring in 1999 when it seemed like he was at the top of his game, as he chose to take a step back and reinvent himself. He returned all his Michelin Stars following his retirement and became a restaurateur ditching the cooking part entirely. Since then, Marco has opened numerous other restaurants like MPW Steak & Alehouse in London, Kings Road Steakhouse & Grill in Chelsea, and purchased a stake in Yew Tree Inn.

White is also a prolific cookbook author, as he has published numerous books such as White Heat and Wild Food from Land and Sea. Marco has also appeared on television a couple of times since he retired from active cooking, getting gigs on notable shows Hell’s Kitchen, Knorr, Masterchef Australia, amongst others. He’s also an avid sports fan, with his favorite club being the current English Premier League champions, Manchester City.

Marco Pierre White has seen it all in the culinary industry; he has paid his dues as an apprentice, he has cut his teeth as a sous chef, and he has established his restaurant from the ground up. He made Harveys one of the most incredible restaurants of the late 90s, and he earned a three Michelin Star off that prospect. He, however, retired from being an active chef to concentrate on being a full-time restaurant owner and a part-time investor. So it’s of interest to see how it panned out for him and his brand.

The Tuna is done to perfection, the steaks are grilled brilliantly, which is done with attention to detail. This tremendous culinary hotspot is fantastic for numerous functions and activities such as special occasions, romantic getaways, large group functions, and serene business meetings. There’s a menu for everybody, and it is clear that the place has the special Marco Pierre White touch!

Marco Pierre White is one of the most respected figures in the culinary industry, and he has achieved so much over the past two decades that his opinions would forever be valid. As such, a lot of people wonder what this culinary genius’s favorite cooking knife is, and thankfully we are here to answer that age-old question.

Chef Marco Pierre White’s favorite cooking knife is undoubtedly the Japanese Mac Knife, a knife that converts simplicity to startling levels of precision. This knife is a favorite of the British culinary expert for various reasons, and we will tell you about some of its most noticeable qualities. First off, there’s the dimple feature, which makes it a great fruit knife, as you’ll be able to cut and dice fruits like apples, oranges, and grapes into the tiniest bits without worrying about chopping your hand. 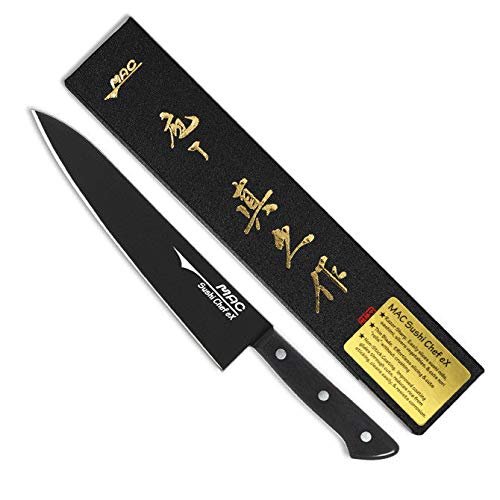 Then there’s the lightweight nature of the knife, as it comes at a startling 6.5 oz, giving the knife the “small but mighty tag” that so many people have grown to appreciate over the years. What’s more, this knife gives you a professional feel, as you’ll have an almost seamless transition from amateur to pro as long as you use it more frequently; that’s something that only a few cooking knives offer.

Marco Pierre White might not be the most patient of teachers, he might not be the friendliest of hosts, but one thing is for sure, he is one of the best chefs ever to pick up a cooking knife. This top-notch culinary expert is reputed to be the “first celebrity chef,” and you don’t hand that title over to just about anybody.

His accolades speak for themselves, and there’s no way you can talk about numerous cuisines without bringing up his name. He might be retired now, but Chef Marco is still one of the top chefs in the world, an inspiration to anyone trying to make the culinary industry his or her playground.