A celebrity chef is a master of the culinary school, they are experts at what they do, and as a result, they have become household names. People in the culinary industry know a lot about a celebrity chef, and that is because their reputation precedes them, and their work speaks for itself. Over the past couple of years, we have seen the title of “celebrity chef” bestowed on a set of deserving individuals with varying skill sets.

However, the only constant in this is that these people are masters at what they do, and they are known for giving customers an awesome mealtime. One of the names that come to mind when talking about celebrity chefs is Vikram Vij, a man that has cooked for some of the best and is the owner of three of the finest restaurants you can find around.

There is little that the great Vikram Vij has not achieved, and we are here to bestow the title of “Top 20 Celebrity Chefs in the World” on a deserving individual.

Today, we will be checking out the great man’s background, where he’s from, where he learned the art of cooking, and we will delve into what got him so popular. We will also discuss his most famous restaurant, a place that culinary enthusiasts love to sink their teeth into and savor the beauties of a well-cooked meal.

We will also tell you a lot about his favorite knife, one that is guaranteed to give you the upper hand in the kitchen and make you feel just like Vikram Vij. We will then round-up with our final thoughts about this great man, a chef whose art is bound to outlive him and be passed on to the coming generations.

Humble to the core and known to be one of the most Industrious persons on the culinary circuit. Vikram Vij was born in Amritsar, Punjab, India, to a humble Indian family. He grew up in Amritsar, Delhi, and Bombay, which radically shaped his cooking style and gave him a sense of versatility and urgency from a young age.

Vikram was always ambitious, and even though he loved home and the security it provides, he proceeded to leave in 1983 to study Hotel Management in Salzburg, Austria. It was there that he put his culinary skills to great use and became a certified chef in a land of new beginnings. Unlike some of the more exemplary top-notch chefs from Asia, Vikram Vij never cooked in India growing up.

Instead, he went to a foreign country and started his craft. Vikram Vij worked in Austria for over five years, learning Austrian cuisine, learning business skills, and eventually bagging his educational degree. He eventually moved to Canada in 1989, where he joined the staff of Banff Springs Hotel as a chef. He also worked at various culinary hotspots for the next couple of years, soaking up the experience and getting some much-needed capital to make the next move.

At the age of thirty, he finally made this move when he opened his first restaurant Vij’s, in Vancouver, Canada, a true testament to his growing skill set and inbuilt adaptability. His future wife, Meeru Dhalwala, joined him, and they built an establishment that earned significant praise in the coming years. Chef Vikram Vij and his wife, Meeru Dhalwala, opened another restaurant plus market in 2004 that goes by the name Rangoli.

Rangoli is one of the choice spots in Canada for anyone looking to get top-notch pre-packaged gourmet, as well as a great family meal. Never a couple to rest on their accolades, the Vij’s opened a food processing facility in 2011 to better serve the increasing demand for their self-made products. Vikram Vij eventually opened his first solo restaurant in 2014 following his marriage to Meeru Dhalwala.

The restaurant goes by the name “My Shanti,” and it has one of the most diverse menus that you can think of, an actual brainchild of Vikram Vij. Vikram Vij has won numerous awards in his lengthy culinary career, and he has been described in some quarters as the greatest Indian to grace a kitchen.

Vikram Vij’s most famous restaurant is his latest restaurant known as “My Shanti,” a majestic culinary hotspot located in South Surrey. My Shanti is the culmination of everything Vikram Vij has achieved in the culinary industry, as it comes after he opened two restaurants with his former partner Meeru Dhalwala. My Shanti is located at the destination shopping location Morgan Crossing, and it pays homage to Vikram’s travels around India.

My Shanti is a favorite culinary hotspot for the regulars and lovers of Vij’s treats, as he caters to their culinary needs with zero distractions. He uses traditional methods to cook his dishes, stays true to the best hygiene standards, and ensures that each meal is cooked with love and class that best represents what he stands for.

My Shanti is open on Sundays, Tuesdays, Wednesdays, and Thursdays from 5 pm until 8:30 pm. It is also open on Fridays and Saturdays from 5 pm until 9 pm. It stays closed for dine-in on Mondays, while it is available for takeout and delivery (through the dedicated food app) from Tuesday to Sunday from 5 pm. There is a versatile menu for your culinary pleasure; all you need to do is take your pick!

Celebrity chefs do not joke with their cooking knives, as these are the number one tools they need before, during, and after a meal is prepared. So it is not out of the ordinary to see them partner with knife-making brands to create a perfect knife set for their unique needs; this could also be an excellent way to make extra money and achieve a broader following in the culinary industry.

Vikram Vij does not have a personalized knife set yet, but there’s a particular knife that he loves cooking with. That knife set is the Guy Fieri Signature 8-Inch Stainless Steel Slicer Knife with Sheath, and he doesn’t handle it with fun. 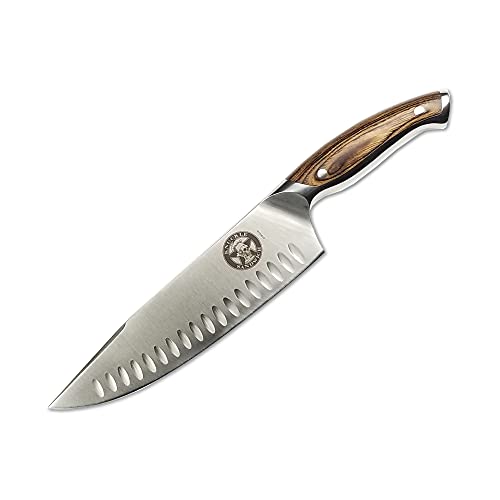 The Guy Fieri Signature 8-Inch Stainless Steel Slicer Knife with Sheath is a classy prospect indeed, as it makes cooking more manageable, smoother, and it meets up with all the safety protocols. It has a textured sidelong grip that is both ergonomic and comfortable and provides top-notch balance and new control.

There’s the durability that it assures, as this knife is known to last for years once it is appropriately handled. What’s more, it comes with a protective sheath that makes for safe storage and protects you and your children from unforeseen circumstances. It’s no wonder why Vikram Vij loves the knife.

Chef Vikram Vij is one of the top chefs globally because he has maintained a certain degree of excellence over the past few decades. First, as part of a duo with his ex-wife, he has done it as a member of notable Canadian culinary hotspots, and now he is doing it as a restaurant owner.