Chefs are graded using a lot of different metrics, and occasionally it might be difficult to just go out of your way and call a chef the best based on a set of uneven metrics or statistics. Typically, chefs are rated based on experience, amount of restaurants owned, critical acclaim, commercial acclaim, social media presence, and a host of other things.

However, nothing proves a chef’s success more than the prestigious Michelin stars that such a chef might have accumulated in his or her career, especially when the chef is privileged to own or head a top-notch restaurant.

There are over a hundred chefs with Michelin stars all over the world, which is quite insane because there are over a million people that call themselves chefs, so a lot of respect needs to be given to the select few that elevate themselves over the rest.

Among the just over a hundred Michelin star chefs around the world, less than fifty percent of them are women, these women being some of the best culinary experts to grace the planet. So today we’ll be looking at the most successful female chef in history using the Michelin star metric.

We will be showing you how the great woman started cooking, what made her so popular, her most famous restaurant, how she earned her Michelin stars, and last but not least a cookbook that she wrote.

They say the only limitation to a person’s potential is his mind, and it’s clear that Carme Ruscalleda’s mind was well and truly made up to become one of the best to ever do it.


Carme Ruscalleda was born Carme Ruscalleda in Serra in the year 1952. She was born and raised into a working-class family that emphasized grit and hard work, qualities that served her quite nicely in her assent to culinary fame. She studied charcuterie technics and commerce in school, as she also practiced cooking during her spare time as first a hobby, then a side hustle.

After she graduated from school, she and her husband took over the reins of operation in her family’s small food business, it was that “small” business that they tender carefully before they elevated it to Michelin star status in the year 1991.

The restaurant which goes by the name Sant Pau grew in fame and stature over the years, and after almost two decades it was elevated to the rank of three Michelin stars in the year 2006. This goes to show that perseverance is key, as it took a remarkable fifteen years for her hard work to reap great dividends which are now the stuff of legends.

Carme Ruscalleda didn’t stop there, as the Japan branch of Sant Pau also has earned two Michelin stars for continued excellence in the culinary industry, while the Moments Restaurant in the Mandarin Oriental Barcelona has also been awarded two Michelin stars.

What is it About Came Ruscalleda’s Cooking Style?


You might be wondering, what is so delectable in Carme Ruscalleda’s cooking. Well, this Masterchef is a sucker for perfection, and she is known for incorporating local Catalan delicacies into every meal cooked at her top-notch restaurants.

Her food represents a shift in the trend of chefs not from the United States of America, as she is super proud of her heritage and she uses her food to prove just that. Carme Ruscalleda isn’t just a chef and restaurant owner, she is also a Spanish best-selling author thanks to her series of cookbooks that have been flying off the shelves since 2000.

He has numerous publications, which are all in English, Spanish, Spanglish, and a host of other interpretations so that all her fans can get in on the fun. Most of her cookbooks emphasize quickness, cleanliness, efficiency, and staying true to good culinary principles.


Carme Ruscalleda’s most popular restaurant is by far her three Michelin starred masterpiece the “Sant Pau” based in Spain. Even though this culinary masterpiece has been closed down (in 2018), it is one of the greatest pieces of Spanish culinary greatness that the world has ever seen.

The great Sant Pau in Barcelona was known to serve the crème of the crop of Spanish delicacies on an everyday basis for over thirty years. It became a favorite for the biggest Catalan personalities, it became something of a national treasure, and the quality always remained the same as far as being top-notch was concerned.

When asked by the press why the Sant Pau was shutting down operations, the great Carme Ruscalleda calmly stated that she was doing this simply to “reorient” her professional life and “we have to bring this story to an end”.

We agree with Carme Ruscalleda, all good things must come to an end, and thankfully she still has two other amazing restaurants for her biggest fans to patronize anytime they’re in Tokyo or Spain.

How did Carme Ruscalleda Earn Her Michelin Stars?


Carme Ruscalleda earned her Michelin stars through hard work, perseverance, grit, and never giving up. She wasn’t exactly gifted a world-class culinary hotspot when she completed her studies, and she wasn’t born with a silver spoon like some other chefs in the industry, instead, she worked from the ground up to become one of the most celebrated chefs and restaurant owners in the whole of Europe and the entire world.

She has three top-notch restaurants namely San Sant Pau in Spain and Tokyo, and the Moments Restaurant in Barcelona’s Mandarín Oriental hotel. Those three restaurants have earned a combined total of seven Michelin stars which is the most by any woman in history.

She broke from the mold which unfairly relegated women to the back of the kitchen and chef’s assistants and other less than glamorous background roles. Carme Ruscalleda took the bull by the horns and made her establishments some of the best-run businesses you can find anywhere on the planet.

She might have closed the Sant Pau branch in Barcelona to get some clarity, but her other two restaurants are running as smoothly as ever, giving the people what they asked for, which is the famous Carme Ruscalleda treatment!

Carme Ruscalleda might have started as a chef, but she turned out to be way more than that, as she has churned out a series of super successful cookbooks that have exposed the world to her famous cooking methods and super strict principles.

The most famous of these cookbooks is no doubt the Mediterranean Cuisine which takes a reader through the steps that are involved in cooking some of the finest Spanish delicacies that you could find in Carme Ruscalleda’s kitchen. 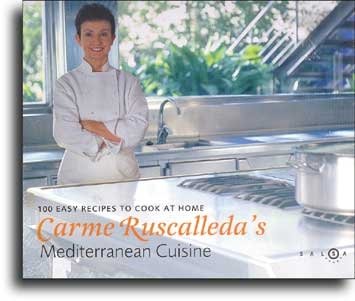 This book perfectly shows some of the things that made Carme Ruscalleda the seven Michelin star chef that she turned out to be. The steps are super detailed, the images are ultra-clear, and no stones are left unturned in showing the purchaser of the book how to go from zero to hero as a culinary artist.

This cookbook encourages the reader to experiment, there are no straight-jacketed approaches to cooking, as different approaches can all produce the same magical result, and that is a point that Carme Ruscalleda hammers thought out the course of the book.

That’s not all, the book comes in a very idealistic design, making for a splendid present to loved ones that have a thing for cooking.

There are about a hundred women that have earned at least one Michelin star throughout their culinary careers, those women worked super hard to achieve the said feats, and Carme Ruscalleda is a part of the select few.

She achieved her dreams by remaining true to what brought her so much fame and success in the first place, and even today she’s still keeping up with the distinguished energy.

She is the best female chef in the world by her breaking the mold and being an inspiration to other women thinking of carving a niche for themselves in the ultra-competitive culinary industry.

Now, what’s next? Maybe she’ll elevate her remaining restaurants into uncharted territory and become the first woman with three restaurants with three Michelin stars. If any woman can achieve that feat, that woman is most likely Carme Ruscalleda!