Celebrities are well-known personalities worldwide that have earned accolades for the mastery of their field, and they happen to have a lot of fans thanks to their skills. On the other hand, a chef has attained a certain level of mastery in the culinary industry.

Hence, not every chef can achieve the title of “celebrity chef,” as it takes a certain amount of “finesse” to accomplish that. However, one of the select few persons that have attained this herculean feat is Bobby Flay, and we will be tracking his journey in next to no time.

Here, we will discuss the background of this celebrity chef, where he is from, where he learned how to cook, how Bobby Flay got into the culinary industry, and how he gained such a high level of popularity. We will also discuss his most famous restaurant, what makes the restaurant so fascinating, and some of the place’s trademark dishes.

Finally, we will also analyze his favorite knife set and what makes that knife set so appealing to the great Bobby Flay. So without further ado, let’s show you a thing or two about this culinary genius!

Bobby Flay was born on December 10, 1964, in New York City; he was birthed into a hardworking catholic family, which was pretty comfortable but placed a premium on hard work and honesty. Bobby Flay didn’t have a similar childhood to many other celebrity chefs, as his family did not have anyone overly keen on cooking for a living.

However, he showed off traits of wanting to be in and around the industry at a young age. That was never more apparent than when, at the age of eight, he asked for an Easy-Bake Oven for Christmas, he was reluctantly gifted the mini-oven, and that proved to be the start of something productive!

Bobby’s parents always wanted him to go to school and become something worthwhile, but that didn’t stop Bobby Flay from dropping out of school at seventeen to work at a pizza parlor and a Baskin-Robbins restaurant. He gained some experience at these jobs, diligently going through the apprenticeship stage, eventually earning a job making salads at a restaurant in Manhattan.

Bobby Flay was finally doing what he wanted all along. He gained so much respect and admiration that the owner of the Manhattan restaurant, Joe Allen, decided to pay Bobby’s tuition at the prestigious French Culinary Institute.

Bobby Flay made the best use of this opportunity, as he was a part of the first graduating class of the French Culinary Institute in 1984. His education at the institute opened the culinary doors for Bobby. He ended up working different jobs as a sous-chef all over the country, mastering his craft in the process.

Finally, he rose to the ranks and was offered the executive chef’s position at Brighton Grill. That was a great experience to put on his early career CV, but he resigned after a short period, as he noticed that he wasn’t up to the task just yet. He then got hired by restaurateur Jonathan Waxman at Bud and Jams, who showed him how to southwestern and Cajun cuisine, and this turned out to be Bobby’s trademark later on in his career.

Bobby Flay then worked numerous jobs, including a stint working at the Stock Exchange Market, a few gigs as a sous chef, a few runs at the executive chef position, and a host of others. He finally found his calling in 1993, when he partnered with Laurence Kretchmer to open Bolo Bar & Restaurant, a high-rise restaurant, and bar that was an extension to their Mesa Grill outfit.

Bobby has since opened numerous other restaurants all around the country in locations such as Las Vegas, New Jersey, New York, Maryland, and Long Island, all in a long-standing rivalry with close friend, Gordon Ramsay. As Bobby continues to rise in fame, the Bobby Flay vs Gordon Ramsay friendly feud between the two chefs continues to flame on as they compete for the best restaurant in the industry.

Bobby Flay’s popularity has transcended the culinary industry. He has cooking shows and specials on Food Network and Cooking Channel such as Grillin’ & Chillin’, Boy Meets Grill, Grill It! with Bobby Flay, Bobby’s Dinner Battle, Worst Cooks in America, amongst others.

He has also made cameos on renowned television shows (not necessarily about cooking), such as Law & Order: Special Victims Unit, Jeopardy!, Scooby-Doo! and the Gourmet Ghost, among others. Bobby Flay is also a renowned cookbook author and horse racing enthusiast.

This culinary industry giant has won numerous awards for his cooking, such as three James Beard Foundation Awards, four Daytime Emmy Awards, a Culinary Hall of Fame Induction, and remarkably a star on the Hollywood Walk of Fame, all before clocking fifty-seven.

Bobby Flay has been in the restaurant business for many decades, and he has had his fair share of restaurant fame, accolades, and experiences. Some people might not know, but Bobby Flay earned a Michelin Star as far back as 2008 when his second Mesa Grill restaurant in Las Vegas was awarded one star. However, he lost the star the following year, and he hasn’t been able to retain it ever since, as Michelin has ceased to publish their Las Vegas edition.

Regarding his most famous restaurant, that honor would have to go to the El Gato in New York, one of the celebrity chef’s more recent forays outside his Las Vegas comfort zone. El Gato is jointly owned by Flay and Laurence Kretchmer and serves some more delicate dishes.

Restaurant goers are sure to enjoy sumptuous meals like kale, wild mushroom paella, and black fettuccine with lobster. El Gato is known for its extraordinary service, top-notch scenery, and versatile menu.

Celebrity chefs are synonymous with luxury knives, as these knives go a long way in shaping up their artistry, and it does wonders for the final outlook of the meal. Bobby Flay is no different, and he has a particular affinity to the Shun Classic Blonde 8″ Chef’s Knife, a knife that leaves nothing to chance as far as cooking is concerned.

This knife has a variety of nifty features that makes it a masterstroke for any chef worth a pinch of salt, and that’s probably the reason why Bobby Flay has gotten so used to it over the years. It has a beautifully modern, D-shaped, blonde PakkaWood handle encases the entire composite tang blade for balance, reducing unwanted rotation and improving grip for right and left-handed chefs alike. 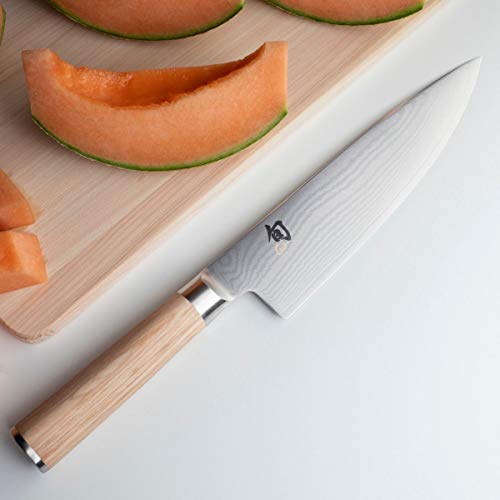 What’s more, this knife is one of the most versatile in the culinary industry, as it happens to be great for gliding through food when used in a back-and-forth or rocking motion that applies some force parallel to what’s being cut, letting the edge do the work. It is also super durable as it was crafted artistically in Japan from the finest wood and steel, meaning that you’ll be using this knife for a long time without the need for replacement.

Quality is assured, affordability is a constant, durability is nonnegotiable, and now we can see why Bobby Flay is one of the knife’s most loyal customers.

Bobby Flay has made good of his culinary ambition, receiving accolade after accolade, opening numerous restaurants, embarking on different projects, and being in the conversation of top chefs for over two decades.

Chef Bobby Flay is no slouch, and you have to check out his CV to know how much of an impact this man has had on the culinary industry. Bobby Flay’s knives are a bigger deal than some other chef’s most significant accolades, and that goes to show how much he has achieved.

We are looking forward to this celebrity chef’s next move; it’s bound to be exciting and more than a wee bit sumptuous.