Being a chef has never been more luxurious, the world has evolved and we have come a long way since the days of old. Now chefs are earning millions by doing what they love best, they are becoming bestsellers, and all these are being done without compromising on the things that make them so sought out for.

Among the top twenty list of the best chefs in the world is a certain maestro that has seen it all, done it all, and is still finding more ways to awe. That master chef is Charlie Ayers who is one of the most visible figures in the entirety of America.

He has held a position that even the best of the rest can only dream about, and that is why he has earned his spot on our list. Here we will be listing some of his greatest achievements, the things that make him stand out in the industry, his come up tale, and of course we’ll be showing you a few facts that you previously never knew about this wizard behind the chopping board.

So without further ado, let’s sink our teeth into one of the finest legacies known to the culinary industry.

Charlie Ayers was born in Chicago and he had his earlier education in New York and New Jersey. He had a proper formal education, as he attended Parsippany High School, and Johnson & Wales University. During this period of formal education, he gained a wealth of experience catering in some of the finest restaurants in the city, as well as painstakingly observing how the best-performed magic in the kitchen.

After he graduated from the University, he made a conscious decision to cook in as many hubs as possible, before he moved to California to truly broaden his horizon.

Charlie got his big break when he won a cook-off to become the executive chef for Google Inc., this was a competition he won in November 1999 and he proceeded to hold for half a decade. He earned his stripes by hard work, perseverance, and an indelible motto of “EAT, DRINK, AND BE MERRY.”

This has served him quite well as he has headed a team of world-class chefs and caterers who served over four thousand lunches and dinners daily for half a decade. It was due to his efficiency that the Google chef role became such a big deal, and it is now one of the more converted roles in the entire culinary industry.

His cafes have gotten recognition from some of the biggest publishing houses, top-notch magazines, and a slew of other top-notch mediums in the culinary industry. Chef Charlie is a huge fan of music, and his contributions to bands like “The Grateful Dead” have earned him cult status in the rock industry.

Charlie Ayers is not one to stay idle for a long period, it seems like he is always up to something, and it is super rare to hear that he missed. That might be one of the reasons why it took him quite some time to formally open his first restaurant, but when he did, like that all say, the rest was history.

Always one for the locals, Charlie Ayers opened a nice little local spot by the name “Calafia Café and Market a Go-Go in downtown Palo Alto”. His lovely food spot has earned critical acclaim for serving super healthy meals that do not compromise on tastiness. His restaurant has a nice feel about it, something that has been known in the public eye as the “Charlie Effect”.

This restaurant also served as a medium for him to showcase all the amazing tricks he learned as the chef in charge of a global brand, it’s amazing that the streets were the chief beneficiaries as all the meals were well and truly affordable.

However, due to varying reasons, the restaurant was closed in 2018, and Charlie Ayers has promised that there would be an update on his next moves soon enough.

Carlie Ayers has seen so much in the culinary industry, that it would be a great disservice to humanity if he didn’t put it down in print. It is for that reason that the great man himself compiled a cutting-edge book of tutorials which showed his teeming fan base some of the secrets behind his delicacies.

The book being talked about is “Food 2.0: Secrets from the Chef Who Fed Google”. This book is a tell-all by one of the most visible chefs on planet Earth, it sees him bear a lot for the reader, and take the reader on a journey to culinary perfection. 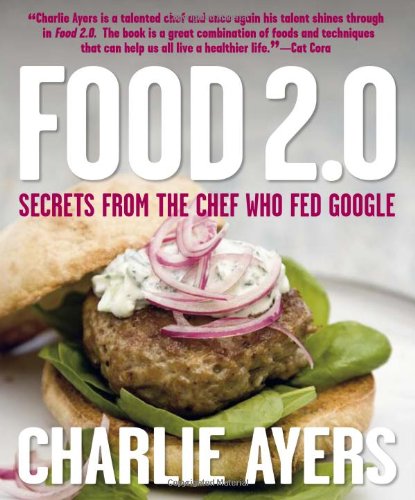 This book will turn your kitchen into your favorite room in the house, it will show you quite clearly how to cook the healthiest meals possible, make them in record time, and give them the Charlie Ayers effect. This book contains a series of tips that range in difficulty, it makes provisions for learners to masters and is available in multiple translations.

So in the famous words of a certain celebrated chef, relax, sit back, and find the best ways to prepare top-notch and nutritional brain food.

What is Charlie Ayers’s Best Dish?

Picking Charlie’s most famous dish would be an incredibly tall order, but you’ll be in a better position if you purchase his top-notch book detailing the steps behind some of the best meals you’ll ever taste. As for cult favorites, we’ll be ordering the “Calafia Gingered Mashed Yam”, “Brussels sprouts with Crimini Mushrooms”, and/or the “Vegan Curried Butternut Squash, Kale & Millet”.

Thanks to his successful restaurants, and infamous cookbook, Chef Charlie has earned quite the income throughout his decade’s long career, as his net worth is a staggering $20 million. He has one of the most unique CVs you can find, and the cool part is that he is one of the youngest chefs on this list.

How many chefs on the planet can boast about holding such a high ranking position in the office of the biggest search engine? How baby chefs around the world can point to such worldwide acclaim and amount of fame for all the right reasons. That’s right, only a select few can, but hardly anyone does it as well as the superb chef Charlie Ayers.

Charlie Ayers’ influence goes far beyond the culinary industry, and that’s why he’s a chef in the spotlight. We can’t wait for his next major move, as it’s bound to astonish the industry and beyond.