Few other names are as recognizable and reputable across such a wide range of industries as Guy Fieri. From his TV show hosting days to his success as a New York Times best selling author, the solid foundation holding up his fame and fortune still remains his undeniable skill as one of the top professional chefs.

The Early Life of Chef Fieri

Born in 1968 in Ohio, Fieri was raised in California where he discovered his love of sharing food with others. At the ripe age of ten, he began his culinary journey selling soft pretzels with the help of his father in Ferndale, California, from a three wheeled bicycle cart aptly named “The Awesome Pretzel Cart”. His inspiration came from a particularly delicious pretzel he had the pleasure of eating on a trip to Lake Tahoe.

The flavor and texture were so good it lit a fire in his belly that fueled his whole career! This fire ignited his curiosity, dreams, and determination, and at the age of sixteen, after saving and waiting, Fieri was able to travel as a foreign exchange student to study in one of the culinary capitals of the world; Chantilly, France. After returning to the U.S., he studied at the University of Nevada, Las Vegas, and graduated with a bachelor’s degree in Hospitality Management in 1990, ready to take the world by storm.

The Start of a Successful Career

Jumping head-first into the industry, Fieri managed several restaurants and chains before 1996 when he got the opportunity to open his own California Pasta Grill,  “Johnny Garlic’s”, with fellow foodie Steve Gruber. Four locations and many, many meals served later, Fieri’s reputation in the industry was growing steadily and positively, and allowed for even more opportunities to share his tasty talents with the west coast with more bars and grills to sprinkle flavor across America’s tongue.

In 2012, his talents made the jump to the east coast with his first New York restaurant; Guy’s American Kitchen and Bar. His horizons didn’t end there, though, as he went on to open 75 restaurants worldwide over his career, from the Las Vegas Strip to the Atlantic City Boardwalk, from South Africa to Colombia, and from Costa Rica to Dubai! Today, Fieri is managing a wide range of restaurants, such as Guy Fieri’s Vegas Kitchen & Bar in Nevada and Guy Fieri’s Chophouse in Atlantic City. He also owns restaurants located on Carnival Cruise’s line of ships.

Due to COVID, a majority of these are temporarily closed as a safety precaution, like many other restaurants. Noticing a struggling community of fellow hard-working foodies during this time of uncertainty and instability, Fieri started a campaign called “Restaurant Relief America” to help alleviate some of the stress food service workers are experiencing in the midst of the pandemic.

The food industry is already a shaky and risky business, but the added restrictions of the number of workers in workplaces and number of customers allowed in for dining (if any) has driven thousands of eateries into the ground and the consequences aren’t only economical but personal for all those involved. To date the relief fund has raised more than $21.5 million for food service workers who have faced unemployment due to the pandemic.

Guy’s generosity and consideration for those who share his passion not only fills their stomachs but our hearts as well. His big heart for people and food is matched only by his big personality, which is why he’s such a familiar face to most anyone who has surfed the food network channel.

Bringing great food from across the map to those watching at home from shows like “Next Food Network Star”, the Emmy nominated “Guy’s Big Bite”, “Diners, Drive Ins & Dives,” “Guy’s Grocery Games,” “Tournament of Champions” and “Guy’s Ranch Kitchen”, allowed a myriad of flavors and friends to be showcased for the world to experience some inspiration that he gained an appreciation for so early in life. This legacy of support, in combination with his contributions to the culinary and entertainment world, is what brings him to mind as one of the top chefs in the world.

But, every top chef needs reliable and durable utensils to be able to whip up dishes that make for great dining experiences and front pages, and for Guy Fieri one of those utensils is the Guy Fieri Signature 8-Inch stainless steel slicer knife. Made of high-carbon rust resistant German stainless steel, it’s an essential part of any chef’s day! Prep work, veggie slicing, dicing, meat carving and a long list of other cooking tasks are all in this knife’s repertoire, all contained in a sleek protective sheath for storage. 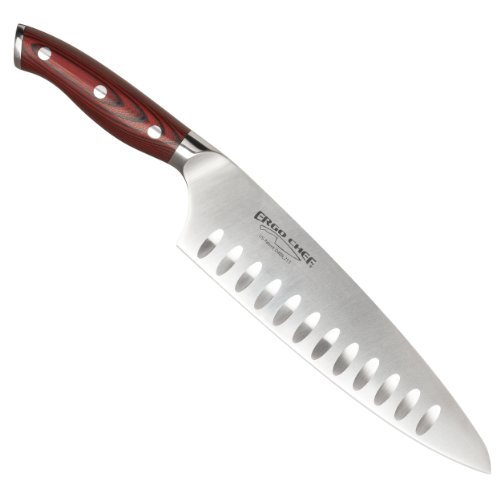 A favorite of Fieri makes it a good recommendation in our book, and the proof is in the pudding for just how much it can do as it was his right-hand man for a variety of his shows and up-close action. With a textured grip handle balanced just right for most chef’s comfort, the solid feel in one’s hand is an underrated but highly appreciated quality after hours of work on end.

The finishing touch and cherry on top is the signature of the one and only Fieri on the blade itself to put his mark on the product in the same way he made his mark on the culinary world. With this knife in hand, the pressure is on to create a dish worthy of Fieri’s taste buds and delicious enough to keep a smile on the face of the consumer lucky enough to taste it.

Undoubtedly the culinary world would not be the same if not for Guy Fieri’s influence and the impact he has had on the industry. From the bold flavors he brings to the table, to the big heart and personality he carries with him everywhere, his legacy is being solidified in the many locations and even more meals that stem from his hand.

Starting from a soft pretzel when he was just 10, to the now booming restaurant empire managed daily, the hard work involved would not be enough without his passion for people and love of food. Greatness speaks for itself in Fieri’s case, and as one of the top chefs in the world, we have him to thank for some favorite eats worldwide!